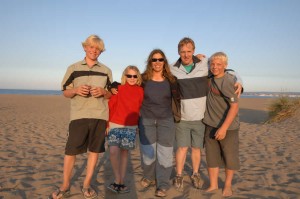 Mark and Kate first discovered the South Alps some 25 years ago through kayaking. For a number of years the trips out to the region just involved paddling; however once we bought a house in L’Argentiere we were able to enjoy the area throughout the year. We moved out to the Ecrins in time for the millenium and our children have been educated and grown up here.

This page is updated and the information given fills you in a bit on what we have been doing more recently. However the pictures of days gone by remain as they are either too cute or too embarrassing to remove, you decide! In fact if I can manage to scan some others of lets say, Charlotte on a podium aged 5 then they may be added too!

Mark still works as a lawyer, however he no longer regularly commutes back and forth to London. Having been a pioneer of working from home he is used to taking a call whilst out and about in the stunning mountain scenery.  When travel proves unavoidable he still  goes via Turin and can get from his office back to France in five and a half hours! It is quicker than when we used to go to the Lake District for weekends.

Mark loves to go skiing, sailing, mountain biking and kitesurfing. He is always up for an adventure!

Kate still spends much of her time supervising building sites! The fantastic Maison Freinet is a testament to this as is the family cabin situated high up in a quiet valley where materials had to be helicoptered onto the site! Kate’s love of old buildings which require renovation is still there and there are lots of them out here! She is however enjoying a well deserved break between renovation projects, and long may it last. Besides, looking after all of the tenants in the long term lets and the holidays makers visiting the holiday rentals does keep her busy.  In her spare time Kate still enjoys skiing powder in the winter and sailing in the summer. An electric mountain bike and some paddle boards have been added to the toy shed. So as well as taking the dogs for walks they can go paddle boarding too, in fact they refuse to be left behind!

Tom has a raft of instructing qualifications,  including raft guide, kayak instructor, and kite instructor in the summer.  More recently he has gained qualifications in sailing and takes groups on epic sailing adventures or delivers yachts, nice work if you can get it! In the winter he is a ski and snowboard instructor. With his days of competing in snowboard cross for the British team and studying through the Open University in the past he too has turned his attention to renovating buildings. Just like his Dad though he is always up for an adventure!

William and his partner took on a big renovation project which is nearing completion, but are these things ever really finished? Together they also embarked on a grand adventure and cycled to Ireland with their dog on tow in a trailer. For the time being adventures are closer to home as they have a baby boy. William is a qualified ski and snowboard instructor with his own business. He loves cycling and now the dog has to run as the baby gets the tow!

Charlotte’s days of competing for the French youth snowboard cross team are thing of the past. She now competes in the World Cup and just this month won the World Championship title with team GB. She still gets time to ski the dogs down the hill from time to time. In the summer she sails a lot, although no longer competitively, and her foiling dingy tests her reactions on the water!

If you want updates on any of this do look at www.bankesfamily.com

We still have border collies, at the moment we have two, but now that Charlotte has won the world Championships who knows, there may be another puppy added to the pack. They get are very lucky doggies that get loads of amazing walks! During the winter they also get exercised by following one of us skiing back down from the resort; during the summer by following the bikes on the many mountain bike trails and chasing up and down the beach whilst we are kite surfing.